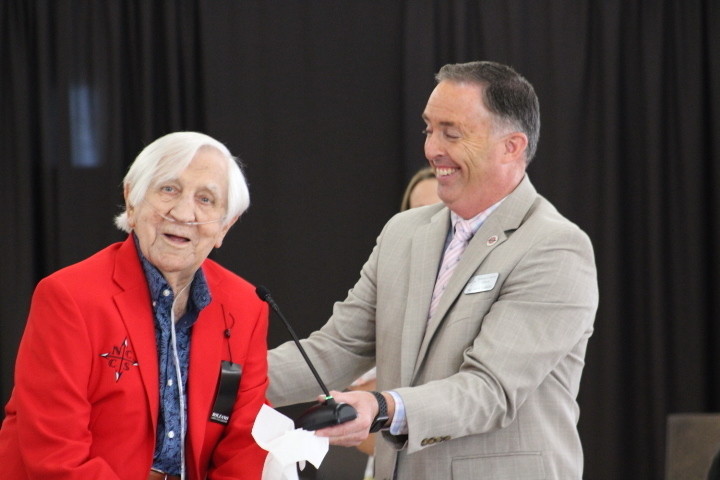 During the Red Blazer portion of the brunch, four members of the Newton-Conover community were recognized with Red Blazer Awards. The Red Blazer Award was instituted in 2011 to recognize individuals who have dedicated themselves to the success of the district by giving their time, effort, finances, and other resources to the district without expecting anything in return. Newton-Conover accepts nominations for this award each year.

The first winners of the Red Blazer Award this year were Don and Mary Greenlee. The Greenlee’s were recognized for their donations of time, money, and resources to the Newton-Conover High School Band Program for the past 30 years. They donated their time by chaperoning and driving the band equipment trucks when needed. They helped start the Newton-Conover High School Band Boosters. In addition, through their bakery, Sarah Anne’s Cupboard, they donated baked goods for fundraisers for the band’s programs.

The next winner of the 2022 Red Blazer Award was Tim Elrod. Mr. Elrod was a Physical Education teacher and coach for Newton-Conover City Schools for 31 years. During his tenure, he was one of the first PE teachers to receive National Board Certification, and was the 1982 Newton-Conover City Schools Teacher of the Year. He has been extremely active at the state level in physical education organizations, receiving the North Carolina Elementary Physical Education Teacher of the Year in 1988; the Physical Education Association Lifetime Service Award in 2005; and was named to the North Carolina Physical Education Hall of Fame Inaugural Group in 2022. As a coach, he coached Men and Women’s Track at Newton-Conover High School for 27 years and was named Southern District 7 Track and Field Coach of the Year 4 times; named North Carolina 2A Track and Field Coach of the Year in 2000; led the 2000 Men’s Track and Field Team to a state championship; and has led NCHS track and field  teams to 7 conference championships as well as 4 Catawba County Championships.

The final winner of the 2022 Red Blazer Award was W. Stine Isenhower. Mr. Isenhower attended Newton-Conover High School, and after supporting his children through the high school, he served as Chair of the Catawba County Board of Commissioners from 1966 to 1970. He also served in the North Carolina State Legislature. For decades. Mr. Isenhower was also known for his talks with the Newton-Conover High School Football Teams before each home game. He has also received at least 3 Order of the Long Leaf Pine Awards from 3 different governors.

The Red Blazer award winners were either provided with a commemorative clock or a Red Blazer. Nominations are accepted each year from October to January, and the forms are located on the district website.